Having the right marine accessories is essential when installing turbidity curtain around road construction or deploying containment boom to keep debris out of a water treatment system. Clarion Municipal provides anchors, tow bridles, and more to properly install and maintain your floating barriers for improved performance and longevity.

The appropriate marine accessories depend on the exact specifications of your curtain or boom. Marine anchors come in different weights to fit different water types and conditions. Reefing lines are only necessary for turbidity barriers when deployed in areas with varying depths or tide changes.

Click through the tabs below or view the Marine Accessories Product Flyer (PDF) to learn about what Clarion Municipal has to offer.

Need equipment for your turbidity curtain installation? Request a Quote or call Clarion Municipal at 863-261-8388.

Standard anchor kits include the anchor, steel chain, polypropylene rope, and one buoy. We offer a variety of anchor models for different types of riverbeds and lake bottoms. Options include:

Tow bridles are used during boom and turbidity curtain installation. They attach the floating barrier to the tow boat, redistributing the pulled weight load to more than one point. As such, tow bridles prevent damage and stress on the barrier during the deployment process.

Reefing lines are marine accessories generally used only for turbidity curtain installation. Reefing lines are used in locations with varying water depths, and similar to the function of window curtain lines, they allow for turbidity curtain depth adjustment. For example, the depth of a river may be 25 feet at one point but 10 feet at another. Reefing lines can raise the curtain at the 10 foot marker to the proper depth, so it doesn't drag on the riverbed.

Reefing lines are built into the turbidity curtain at the time of manufacture upon request, so ask about them during the quoting process.

Floating marker lights increase the visibility of the curtain or boom while it's deployed in the water. Every marker light includes a light, pole, and buoy, so it floats next to the barrier. They ensure the safe navigation of boats and ships in harbors and marinas. Our floating marker lights also comply with most demarcation regulations on the local and state level.

Marker buoys are used to indicate the locations of turbidity curtain and boom anchors. Designed for commercial use, the Transport Infrastructure department can also use them in city harbors, smaller public marinas, and boat docks. In addition to their primary purpose, marker buoys can also be deployed as demarcation guides and mooring signals.

For more information about our marine accessories, Contact Us or call Clarion Municipal at 863-261-8388. 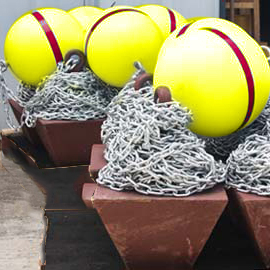 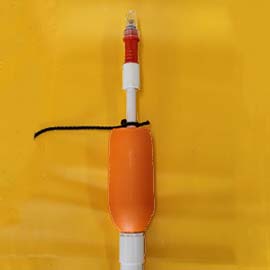